National Capital Tour took place in Canberra between 18th September – 20th September.
There are two main grades on offer, NRS and open grade.
We had impressive results from both the women and men race team.
In the women NRS, we have a team comprises of Abby Sneddon, Ella Scanlan-Bloor, Givanna Haryono, and Lauren Fitzgerald. We also have Stephanie Lord racing the D Grade.
In the men NRS, we have Christopher Miller racing as part of Park Bikes team. This is Chris maiden NRS race.
Meanwhile, we also have men’s team for the open category (A grade). The team feature Cameron Judson, Shaun MacWilliams, Rowan Lean, and Ethan Dougherty.

This stage is exclusive for NRS only. It’s a 7.39 km time trial at Googong Village. The course was essentially a downhill out and an uphill back.
We had an impressive result from the women’s team. Lauren Fitzgerald, the latest recruit to the women’s team managed to finished in 9th place, conceding only 41 seconds from the winner Ruth Corset.

For those who are familiar with Canberra, the name Corin Forest would send a chill down your spine.
Stage two is a road race for all grade. 95.4 km for the Women, and 58.6 km for the open grades.
The stage starts from the heart of Canberra and finishes at the top of Corin Forest. The overall terrain is undulating with some mini climbs along the way, and a 10 km climb to the finish.
In the women NRS, the race started off pretty calm with a very small group attacking from the get go.
Things started to get pretty hot when the bunch were approaching the first QOM point. There were constant surging as the top guns battling for the QOM points. As a result, some riders were shelled out, and the bunch were split into two. Upon cresting the QOM, the back bunch were able to work together to get back to the main bunch.
There was a couple of tiny attacks afterwards, but it did not last long.
Just as the bunch were approaching the 2nd QOM checkpoint, the big guns were at it again. The climbing pace was searing hot. This resulted in many casualties at the back.
At the start of the final climb towards Corin Forest, a small group of really strong riders managed to peel off. Lauren were able to get to this group and stole the stage win! Beating likes of Ruth Corset and Lucy Betchel.
What an impressive result by Lauren in her only 2nd NRS race! 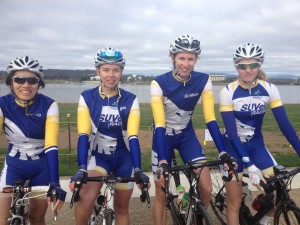 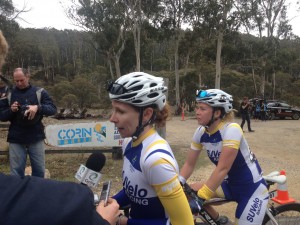 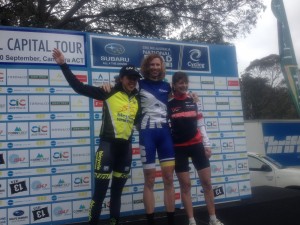 In A grade, the Men’s team were trying to put their plan in action. In short, the plan was to put either Ethan or Cameron on a breakaway, and have Rowan to keep Shaun as fresh as possible for the 10 km final climb. Unfortunately the race did not go quite as they wanted.
Cameron broke away at about the 12 km mark and was joined by one other about 10 km later. They managed to stay away and had over a minute advantage at the base of the climb.
Unfortunately for Cameron, his breakaway companion fell apart. Not willing to give in, he decided to plug on. Meanwhile the peloton was in tatters.
With about 3 km to go on the climb, Cameron was joined by 3 other riders. About 30 seconds later, two riders decided to break off, and unfortunately for Cameron was not able to go with them.
The break stuck until the finish, and Cameron came back with 4th place.
What an epic stage! 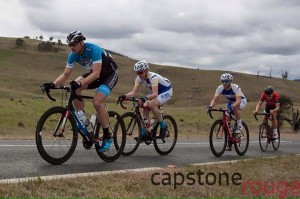 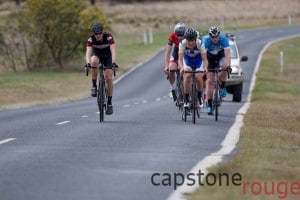 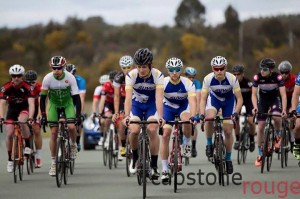 Stage three is an undulating road race around city of Canberra. It is 74.9 km for the NRS and 56.8 km for the A grade.
For the women’s team, the plan is to put Abby on the breakaway, and for Givanna and Ella to keep Lauren safe in the bunch.
The race went as planned. Abby managed to stay in the breakaway until it was brought back, and Lauren were able to stay in the bunch safely until the finish line.
Although there were some argy-bargy in the bunch as riders were trying their best to not be at the back of the bunch, there were no crashes. Everyone finished safely within the time cut. 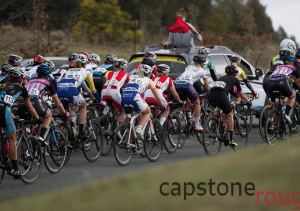 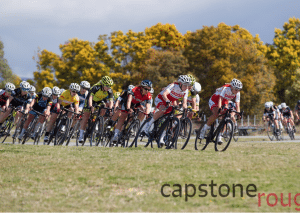 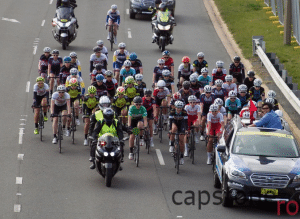 In A grade, the selection was made with about 25 km to go when the GC contenders pressed hard on a long technical descent, followed by a series of climbs with false flats in between out of the valley.
A crash on the climb and further attacks reduced the group further so around 12 riders. The finish was hectic, Cameron had Robbie Kater‘s wheel but was muscled out. Cameron came in 4th, same time as the stage winner (Robbie Kater) but with less the time bonus.
Rowan came in about 1:40, followed by Shaun, then Ethan. 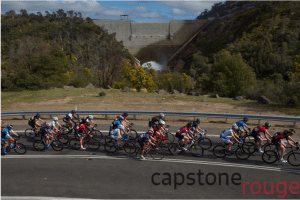 The final stage of the National Capital Tour features a criterium around Stromlo Forest Park.
Everyone were able to finish safely in the women’s team. Lauren was the highest placed rider from the team at 11th. On the GC, she was able to retain her 9th place.

Not much happened in the A grade as everyone were very tired after the road race in the morning.
In the GC, Cameron finished 4th, followed by Rowan, Shaun, and Ethan.