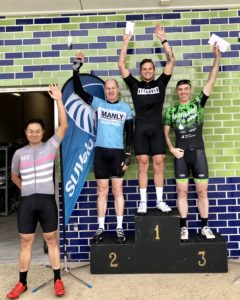 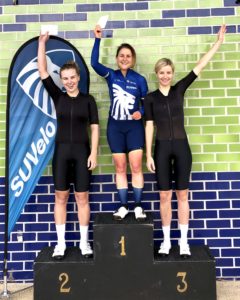 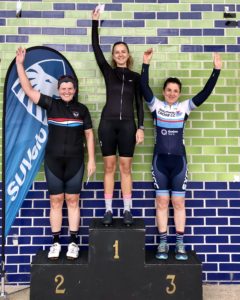 Ladies first…
This month we ran the women’s grades first, which was met with the largest B grade field seen to date. This produced some very competitive racing, with the bunch splitting mid race and the selection coming which happened to include the strongest sprinters too.
It was great to see so many riders, some of which attended our last ‘come and try’ day and are progressing brilliantly, so much so that they might get the nod to race A grade next month…
1st: Emile Smit (BRAT)
2nd: Sue Henry (RBCC)
3rd: Faye Younger (SXCC)

In a small women’s A the field the ladies rolled turns working hard throughout. As a Rapha vs Sydney Uni Staminade the ladies got to work and it was Georgie Whitehouse showing the strongest (who then doubled up and raced Men’s B and was well in amongst it, drilling the front and getting in some valuable training before she jets off to Europe … good luck over there Georgia!
Rapha rounded out the rest of the podium, with good mannered and enjoyable racing.
1st: Georgia Whitehouse (SUVelo)
2nd: Samantha Boyce (Rapha)
3rd: Jennifer Kay (Rapha)

Next up we had the men’s races. After so many A graders asked for a later start, none were caught napping as a solid break did not form. Various efforts were made, most notably Angus Wilson having various digs off the front, as well as Chris Miller and Aaron Paul coming together for some time of the front. As a result of this break Chris Miller took out the prime.
As the race settled it looked we may have been set for a sprint, before Robbie Matthews and Liam Kelly slipped off the front and worked well together, keeping a 10 second gap into the final corner and Liam kicking and beating Robbie into 1st.
1st: Liam Kelly (Cheeky)
2nd: Robbie Matthews (SUVelo)
3rd: Angus Wilson (SUVelo)

A fast paced B grade race proved it difficult for riders to get away. Nic Martin rode solidly, attacking the bunch and having some help from Georgie Whitehouse who was always alert to moves.
Nelson Aston is always one to watch and he took out the prime
You could be forgiven for forgetting the sprinters in the race were there, certainly no TV time or social media attacks from these guys, but it was ever thus, Dan van der Laan taking the sprint with ease.
1st: Dan van der Laan (SUVelo)
2nd: Michael Harder (MWCC)
3rd: Darren Russell (SUVelo)

A really enjoyable morning for all.
As always a huge thanks to the helpers and commissaire for making this race possible.