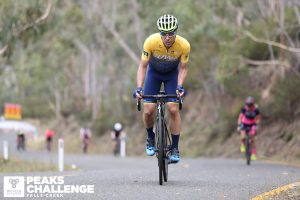 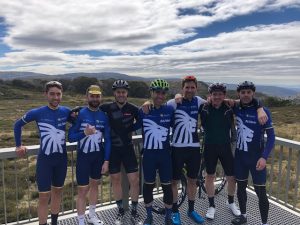 Peaks Challenge is the best day of the year on the bike.  There it is, said it.  It is the Queen stage of the Fondo Calender, one of the hardest things you will ever do and something that everyone has to put on their cycling bucket list.  This is my fifth year straight of tackling the Peaks Challenge Falls Creek, sometimes also known as three peaks.

SUVelo also has a great contingent of riders heading down to Falls Creek every year.  Organised by the Peaks guru Joel Lidden, 2019 was no exception with a crack crew of Fondo fiends heading down to our Falls Creek home base otherwise known as Chalet 22. This year the SUVelo crew included:

One of the best parts of riding the Peaks Challenge is the lead up and training with mates.  Once new years arrives, thinking about Falls Creek is all consuming and there is no shortage of the SUVelo Fondo squad to train with every day of the lead up to the Challenge.

We always head down on the Friday morning and arrive late Friday afternoon with compulsory stops at Goulburn for coffee, lunch at Jugiong and Cherry Slice at the Dedarang General Store.  Having the full Saturday to get ready for the race is must.  It gives you plenty of time to spin the legs, get the bike checked off, pack food for resupply stops, watch reruns of Paris-Roubiax on Youtube and generally talk crap for hours on end.

No matter how early you go to bed, the night before Peaks is one of the worst sleeps you will ever have.  At some point you will fall asleep and just before the alarm goes off at 5am the entire village wakes to begin a long day.  You line up on the start line in the dark and wait for the first wave to be released at about 6:45am.  For those that do not know, the race starts with a 35km descent from Falls Creek beginning in the dark with 2000 of your best mates.  This year the temperature was perfect, not hot, not cold and only a light jacket needed at the start.  Right on 6:45am we were let go and fun began.  The descent is on a fully closed road and some people rocket down the hill. It is full on experience to belt down a descent with so many people, but to everyone’s credit it always seems to work out (I saw only one stack on the way down).  After about 40 mins of descending, we hit the town of Mt Beauty and ditch jackets in back pockets and beginning climbing the first of the Peaks, Tawonga Gap.  With fresh legs, it feels almost too easy and after about 28 mins of solid tempo climbing we hit the top and begin what is actually the fastest and most technical descent of the day off the back of Tawonga Gap.  By this time the ride has thinned out and you can take the full road to fly down and join a group to Harrietville.  After Harrietville and a bottle refill it is up the big climb to Mt Hotham, a 32km climb through some of the most scenic roads you can ride a bike on.  At Dinner Plain, I met up with Paraic Hogan who was on a come back ride from a nasty fall at Heffron at Christmas.  We joined up with a few other and made the long haul to Omeo and Anglers Rest.  Whist we did not have the heat of previous years, there was a stormy front moving through and the some nasty crosswinds picked up. Note to self, leave the 50mm wheels at home next year.  Paraic and I made good time to Anglers Rest, which is the last stop before the final climb. The back of Falls is one of the nastiest climbs you will ever do, especially in the Peaks Challenge when you hit it with 200km in your legs.  The first part of the climb is known as WTF, some people say because it is the way to Falls, but most people simply turn the corner and say What the F#$K am I doing. The first 8km of the back of Falls literally does not let up with grades over 10%.  You see people sitting, crying, talking to Elvis.  A few years back I met a guy who sent a pair of sneakers to Anglers Rest to put in back pocket.  The last few years I have always cramped near the top, but this year I had a special weapon – Pickle Juice.  I gave Paraic, a spare bottle of pickle juice, clicked the DI2 into the 38-34 (yes a 34) and we hit the climb.  I felt pretty good and gave it a nudge and before I knew it, I had crested the top was on the final home run to Falls Creek.  The storm front that brought the wind, had now turned to rain and the final 5km into Falls Creek was a wet and cold affair, but with home in sight it was easy to push on.  Rounding the final corner, I was conscious not to bin it in the final 50m and ended up crossing the line right on 10 hours.  No where near my best time but I was happy nevertheless given my training only really starting on the 1stof February.  Soaked through and wet, there was little time for a photo with Paraic before I started shivering uncontrollably and I quickly dashed for Chalet 22 and a hot shower.

Bicycle Network who run the event do a great job and on Monday morning they sent me an email with an entry form for 2020.  I debated in my mind for a few hours but before the car had pulled up in Sydney, I had decided… screw it, one more time. I will be back in 2020 for number 6.  Hit Joel Lidden or myself up for a chat about joining your fellow Lions in Falls Creek in 2020.